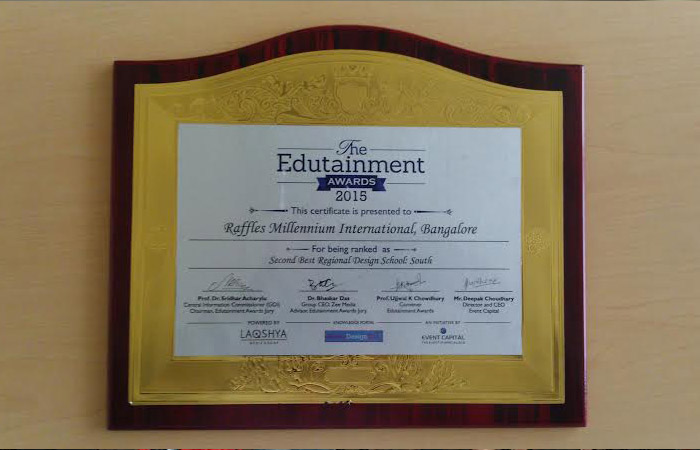 India – Raffles Bangalore was recently honoured with the National Education Achievers 2015 award for “Best Fashion and Design Institute in Bangalore” by leading media and marketing group, Praxis Media Private Limited. As a significant symbol to identify and honour the achievers, innovators and leaders of the education sector, the endeavour celebrates and felicitates excellence, reputation and exemplary work in a spectacular style. 40 winners at 5 different levels, 10 major categories and 50 sub-categories of the National Education Achievers 2015 were declared on 30 May 2015.

The winners were recognised for signifying their innovation, dedication, ethics, achievement and excellence in the education sector. The outcome was the result of 2 months of extensive research which included nomination process, extensive surveys and research, opinions and feedbacks, categorisation and scrutiny of the nominations based on various parameters and finally choosing the awardees though an independent jury panel. The major parameters which were considered for short listing the winners included infrastructure, faculty, placements, annual growth, impact potential, students and alumni feedback, industry feedback, innovation, scalability, use of technology, achievements, previous honours and accolades, corporate social responsibility, amongst others.