Hong Kong – Since being first spotted in July 2014 by a panel of A-list judges from DKNY, H&M, Moiselle and Brilliant Global LTD at Raffles Hong Kong’s Début House Show, Seoul born, and Hong Kong trained, Raffles Fashion Designer Sue Suh (aka :8CUFF) has received global acclaim for her cutting-edge approach to sport-lux streetwear from some of the most prestigious design awards and trade shows in the business of fashion.

:8CUFF has received recognition from Hong Kong to Italy, Paris to Los Angeles. Since the brand was first awarded the ‘Brand Ready Award’ and ‘Collection of the Year Award’ at Raffles Début Show, the international awards and recognition continue to distinguish Sue Suh as a true entrepreneur and design innovator. Often standing out amongst thousands of international rival-entries to receive the fashion industry’s praise.

Awarded the Silver Award in the Avant-Garde Menswear category at the International Design Awards in Los Angeles in March 2015, :8CUFF stood out from 1,000 entries submitted by designers from 52 countries throughout the world. Sue Suh top-eight pieces of international recognition to date include: 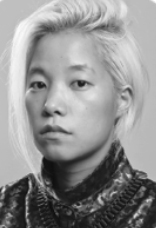 Sue Suh is based in Hong Kong S.A.R, China. She studied at Raffles Hong Kong and graduated in 2014. Her collections are produced in Hong Kong. Sue Suh was born in Seoul, South Korea, and raised in Shanghai. Now based between Shanghai and Hong Kong, Sue launches the label: 8Cuff. The work is sport-lux streetwear, and her first two collections titled ‘WHO WATCHES THE WATCHMEN’ are inspired by social issues.

“On my collection: the inspiration derived from the graphic novel ‘Watchmen’ by Alan Moore. The basic storyline is about 6 heroes fighting for their own meaning of justice and their mission is to watch over humanity”, Sue Suh explains. “But who watches the ‘Watchmen’? This kind of plot related my own opinion on the fashion world, the industry’s plagiarism, wealthy companies’ immorality, and the unfair structure of the fashion industry. I took the Ying and Yang as an object of inspiration, the inevitable relationship between good and the bad”.

Read more about her additional media coverage below: